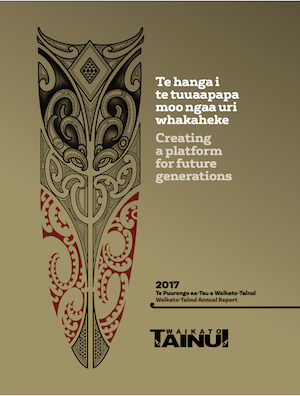 Waikato-Tainui Annual Result 2017
Waikato-Tainui is reporting a record year of results and growth, highlighted by the return of the sacred whenua of Rangiriri Paa.

Maxine Moana-Tuwhangai, Chairman of the tribal authority Te Whakakitenga o Waikato, said the 2017 financial year had shown good progress with a net profit of $137.8 million, an increase in tribal wealth by $128 million to $1.07 billion, and record distribution alongside achievements in the delivery of social, cultural and environmental value.

“Waikato-Tainui is implementing a range of programmes to support the vision our tuupuna had for the success and wellness of our people today, our mokopuna of tomorrow, and our whenua and awa,” said Ms Moana-Tuwhangai.

“The 2017 financial year is significant for the progress made in important areas such as supporting our marae, revitalising our Waikato reo and tikanga, growing our tribal estate, resolving affordable housing challenges, educating our members, and enabling career and job opportunities,” she said.

The tribe’s goals for the development of its people had taken a major step forward with the commitment of significant funds towards the key areas of housing, land purchases and revitalisation of Waikato reo and tikanga. Some of this funding, which totals $57.5 million, was already making positive impacts, with the remainder to be invested over time.

Ms Moana-Tuwhangai said the tribe’s strategy to develop strong and mutually beneficial partnerships with key organisations was also a factor in its overall progress.

“The Waikato Raupatu Lands Trust, Waikato Raupatu River Trust, Waikato Endowed Colleges Trust and Tainui Group Holdings are working closely with a range of government, business, iwi and community partners to help achieve our objectives. We believe strongly in the principle that supporting others enables us all to succeed and I acknowledge all of those partners we have working with us today.”

Rukumoana Schaafhausen, Chairman of the tribe’s executive committee Te Arataura, said the return of Rangiriri Paa in August 2016, achieving the milestone of more than 10,000 education grants and scholarships since 1995, and the doubling of the annual marae grant were special highlights.

“The cultural, spiritual and historical significance of Rangiriri cannot be understated and its return has begun the healing of a mamae that is more than 150 years old,” she said.

“Additionally, the significant increase in annual grants to our marae is a development that will see tangible rewards in our communities, as does our continuing investment in the education of our people.”
Partnerships, asset investments, and a vibrant business environment had contributed to record financial results for Tainui Group Holdings (TGH).

TGH Chairman, Sir Henry van der Heyden, said for the first time in its history the company was reporting a net profit of more than $100 million in a single year. The net profit was comprised of both cash and significant increases in asset valuations.

“The record net profit of $114.8 million and TGH’s strong financial position have enabled us to pay a record dividend of $16 million plus a further special dividend of $6 million, for a total dividend of $22 million,” said Sir Henry.